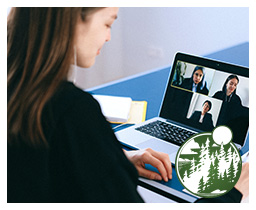 The prospect of holding a meeting may become even more stressful when the session is online. As meetings are new to the virtual world, there is no roadmap to hosting a successful one. In this post, we’ll discuss common virtual meeting mistakes.

1. Not acknowledging mistakes. Although many people know that, an all-too-common moment in virtual meetings is pushing mistakes under the rug and acting like they haven’t happened. We’re all aware that adapting to new processes can be difficult, so of course, there will be unexpected issues.

2. No backup plan for faulty technology. A dysfunctional microphone or PowerPoint won’t derail your in-person meeting, but it will effectively shut down a virtual one.

3. A lack of discussion and collaboration. One of the greatest aspects of meetings is the collaboration and discussion that stems from audience engagement. Virtual meetings notably make this harder, and they’re often marked by the opposite.

5. Trying to multitask. It’s never been easier to join a meeting, and it’s also never been easier to lose focus during a meeting.If you’re using a personal computer, it can be especially difficult to stay focused because everything you enjoy is right there in front of you.
6. Not encouraging speakers and hosts. It can still be just as nerve-wracking to face a screen full of faces as it is to stare at a room full of people.

7. Leaving no space for networking. As virtual meetings occur on a digital device, attendees have no further interaction with their peers when they end. Stamp says that forgetting about the hallway chat aspect of meetings can be detrimental.

8. Being impersonal. You may feel pressure to display a more polished side of yourself during virtual meetings. However, being too polished can sometimes dehumanize you, which affects relatability between you and your audience.

9. Not using the mute button for all it’s worth.
Nobody wants to accidentally leave their microphone on so everyone can hear them yell to a roommate or ask a pet to stop making noise.

10. Not having fun. Although hosting can be stressful, Ladd and Stamp say that it’s essential to have fun. Virtual Meetings Can Still Be Successful, Engaging, and Fulfilling.